Biography
Iwikau, the second surviving son of Herea, the first Te Heuheu Tukino, and the child of Rangiaho, of Ngati Maniapoto, was born late in the eighteenth century. Like his older brother, Mananui, he became a great warrior, known for drawing first blood in battle.

In January 1840, accompanied by Te Korohiko, he travelled to the Bay of Islands with CMS missionary Henry Williams to take part in the deliberations about the Treaty of Waitangi. Impressed by Williams's explanation of the treaty, he and Te Korohiko signed, although they did not have the authority to commit the tribe. When, several months later, a copy of the treaty was discussed at Rotorua, Mananui repudiated Iwikau's action, but the Ngati Tuwharetoa signatures remained on the treaty nevertheless.

After he returned from the north, Iwikau built an ornamented house, close to the waterfall at Waihi, at the southern end of Lake Taupo; it was painted red with clay from the hot springs near Te Rapa. He had been so impressed with the hospitality he had received in the north that he named this house Tapeka, after the place where his hosts lived at Kororareka (Russell).

After his brother's death in 1846 Iwikau was chosen to succeed him; Mananui's son, Horonuku (also called Patatai), was considered too inexperienced. Iwikau went to live at Pukawa, in the territory of Ngati Manunui, the hapu of his senior wife, Ruingarangi (or Morunga); Pukawa became his principal pa. For a time there was conflict between Iwikau and Te Herekiekie of Tokaanu over the issue of leadership, but they were reconciled by the missionary Thomas Grace. Iwikau had long requested a missionary and Grace selected a site for a mission at Taupo in the early 1850s. In April 1855 he settled with his family at Pukawa, under the protection of Iwikau. According to the geologist Ferdinand von Hochstetter, who visited Iwikau a few years later, the Ngati Tuwharetoa leader was 'not averse to Christianity' but feared that baptism would bring about a loss of influence and authority. He would also be obliged to give up several of his wives before baptism. Although he never became a Christian, Iwikau attended church services regularly and Grace respected him as 'friend and protector'.

When he visited Auckland in the late 1840s, Iwikau became acquainted with Governor George Grey. In 1850 Grey visited Pukawa, and, in recognition of Iwikau's loyalty to the Queen, presented him with a flag similar in design to that given to the northern tribes by William IV in 1834. Grey admired his richly carved food storehouse and remarked that all chiefs should have such storehouses as a sign of their standing and generosity. When later this storehouse was destroyed by fire, Iwikau, remembering Grey's words, set out to build another, larger and more elaborately ornamented. After four years of building, it was completed in 1855, and named Hinana. To demonstrate his mana, which was being challenged by some of Ngati Te Aho, Iwikau invited people from all the major tribes to its opening in November 1856. After his death it was re-erected at Waihi. It is now in the Canterbury Museum, while at Waihi village the dining house is called Hinana.

During the 1850s Iwikau sought both to restrain Maori protest and to support the growing grievances over the loss of land. Late in 1856 he convened at Pukawa a meeting opposed to further land sales; an ardent proponent of Maori nationalism, he also encouraged the movement to set up a Maori king. He did not seek the position for himself and supported the installation of Potatau Te Wherowhero at Ngaruawahia in 1858. However, when the Taranaki war broke out in 1860, he tried to prevent Ngati Tuwharetoa from joining, fearing that the tribe's lands would be threatened.

Iwikau, towards the end of his life, was described by Hochstetter as 'of middle size, delicately rather than robustly built, wearing his black hair in long locks.' He had a 'beardless face,…imperfectly tattooed upon the right cheek, with…small sparkling eyes'. He died in October 1862, and is buried close to the meeting house, Tapeka, at Waihi. He was survived by Ruingarangi, with whom he had had a daughter, Whenerata, and a son, Iwikau. He is remembered for his laments, especially the one that some say he composed on the death of his brother, Mananui, in a landslide. 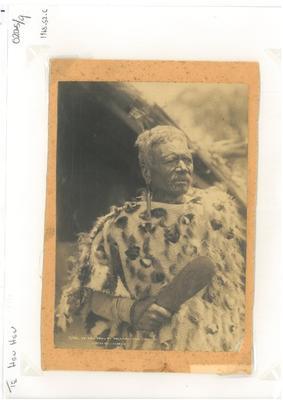