Biography
New Zealand Shipping Company
Operator of cargo (especially refrigerated cargo) and passenger services between New Zealand and the UK, and, through subsidiaries and associates, between Australia and the UK and across the Pacific.

Pre-P&O Years
The New Zealand Shipping Company Limited was incorporated in 1873 in Christchurch, New Zealand, by a group of local farmers and merchants, who were dissatisfied with the country’s existing shipping facilities and their inability to cope with the country’s rapidly expanding trade. The company was initially administered from New Zealand, with input from a ‘Board of Advice’ in the City of London.

The new company began by purchasing four second-hand iron sailing ships. At first competition from existing shipping companies, particularly Shaw Savill and the Albion Line was keen, but following a brief rate, an agreement was made to establish uniform and viable rates of freight.

Within four years of its inception NZSCo was operating seventeen ships under its own flag as well as a large number of chartered vessels. In 1879 the joint charter of a steamship with Shaw Savill demonstrated that, at the outset at least, a regular steamship service would have to be subsidised. Accepting this, the Colonial Government provided for a subsidy of £30,000 on its joint contract with Shaw Savill and Albion and NZSCo in 1884: this contract ran for five years but was not renewed. Refrigeration was introduced and the second cargo of frozen meat from New Zealand was carried in 1882 in one of the company’s sailing ships, Mataura, fitted with Haslam’s cold-air refrigerating machinery.

The company was reorganised in 1880 and financial control of NZSCo was transferred to London. In 1889 Edwyn Sandys Dawes (later Sir Edwyn, 1838-1903) acquired controlling interest in NZSCo. It was the start of a connection between the company and the Dawes family which was to last right up until 1970.

Equal in importance to the United Kingdom trade, NZSCo made strategic alliances with other shipping companies, either as shareholders in a company or partners in a consortium. An early example of this was the New Zealand & African Steamship Company (1902-1911), formed to take care of trade with South Africa. A Canadian connection, the Canadian-Australian Royal Mail Line (1901-1910), was a joint venture between New Zealand Shipping and the Union Steam Ship Company of New Zealand.

A much more significant corporate development came when NZSCo absorbed the Federal Steam Navigation Company in 1912 and with it a firm foothold in the neighbouring Australian trade. Federal Steam had been founded in 1892 when Allan Hughes (d1928) had acquired the remaining assets of Money Wigram & Sons Ltd (owners of the Blackwall Line of high-quality sailing passenger ‘frigates’ which had failed to make the transition to steam power). Federal Steam ships continued to fly the same house-flag and adopted the same English county names used previously by Money Wigram’s ships.

The P&O Years
In September 1916 The Peninsular and Oriental Steam Navigation Company acquired a controlling interest in NZSCo. In spite of the change in ownership, both NZSCo and Federal continued to enjoy considerable autonomy with the latter's founder Allan Hughes becoming chairman of NZSCo in 1920.

The company continued to pursue joint ventures and in partnership with Ellerman's and Port Line, the three companies formed the Montreal, Australia and New Zealand Line (MANZ) which operated from 1936 to 1971. MANZ took in the East Coast United States, which trade was also served by the American and Australian Steamship Line (1956-1971). In 1954 the Avenue Shipping Company Ltd was founded to augment the NZSCo and Federal Steam fleets when needed; otherwise its ships operated on tramping services. Crusader Line (1957-1967), a joint service from New Zealand to the West Coast of the United States and to Japan (in partnership with Shaw Savill, Port Line and Blue Star) was another Pacific venture. Crusader would later become containerised as Crusader Swire Container Service, part of Overseas Containers Ltd (OCL). Finally the Dolphin Line (1967-1971) was a joint service formed of conventional cargo ships to supplement the OCL service; the partners were NZSCo, Scottish Shire and Clan Lines, Shaw Savill and Ocean Steamship Company.

The advent of the container ship (the Australian trade was one of the first to be containerised in the late sixties with the New Zealand trade following much later) and the rapid development of air travel presaged the end of the passenger/cargo liner in the 1960s and the conventional cargo liner in the 1970s. The subsequent absorption of New Zealand Shipping Company, Federal Steam and Avenue Shipping Company into the General Cargo Division of P&O in 1971 was seen as a natural development. 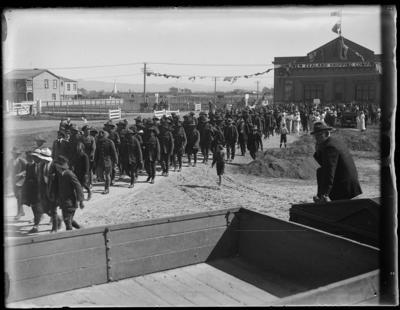 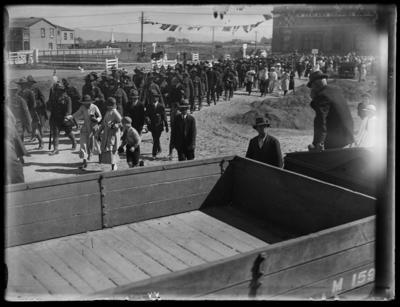