Biography
Alison Blomfield Pickmere was born in Mount Eden, Auckland, on 14 November 1908, the daughter of Elinor Violet Croyden Woolley and her husband, Arnold George Pickmere, a railway manager. After leaving school she wanted to be an artist, but succumbed to pressure and postponed a career that her family considered both insecure and unsuitable. Instead, for 10 years she was secretary to an engineering firm, where she became knowledgeable about metals; she also worked as a part-time interior decorator.

Finally, in 1937 Pickmere attended Auckland’s Elam School of Art for nine months, laying the foundation of her future career. In 1942 she joined the Auckland Society of Arts (ASA), serving both as a working member and as its secretary (1942–46). She also became a member of the Hawke’s Bay and East Coast Art Society and the Rutland Group. By 1947 she was in Australia studying at East Sydney Technical College, where her friend Dorothy Thornhill was teaching. At that time the Contemporary Art Society was drawing New Zealand artists to exhibit there, including Rita Angus, Alfred and James Cook, and Godfrey Miller. Pickmere also studied Bauhaus design for three months with Phyllis Shillito.

On 30 June 1949, in Sydney, she married Terence Thornton Bond, a publisher from Auckland. A nephew of the well-known New Zealand painter Charles Goldie, he had attended Canterbury Agricultural College, Lincoln, and then studied typography and bookbinding in England. For some years his property at Mahurangi had been a haven for many in Auckland’s literary and artistic community. Although a difficult man to live with, Terry provided Alison with moral support, a studio, a library on ecology (she was a lifelong conservationist), and a self-sufficient garden at his home in Birkenhead, Auckland. There were no children of the marriage.

In the 1950s Alison’s younger brother Ralph, an architect, helped design the National Women’s Hospital at Green Lane, Auckland. Alison researched the effects and therapeutic benefits of colour on patients, and helped design the hospital’s interior decor. She was again employed by the ASA between 1952 and 1956, and organised the first Australian contemporary art exhibition in Auckland. She exhibited with the Thornhill Group and in 1957 with The Group. In 1958 her work was included in an exhibition of New Zealand contemporary artists touring the Soviet Union.

In 1963 Pickmere (who continued to work under her unmarried name) attended Paul Olds’s design in painting course at Wellington Polytechnic, which provided another way of handling semi-abstraction. Later that year she and Terry went to Europe, where printmaking was booming. In Paris she attended S. W. Hayter’s Atelier 17 to study viscosity printing, a technique that enabled many colours to be printed simultaneously. After her return home friends helped her make rollers, a hot plate and etching equipment, as import licensing made the acquisition of essential printmaking materials difficult.

From the early 1960s Pickmere mostly used Hayter’s colour-etching technique. She exhibited four times at the New Vision Gallery, as well as at the ASA, the Hawke’s Bay and East Coast Art Society, the New Zealand Academy of Fine Arts, and galleries in Sydney and Adelaide. She is best remembered for her abstract interpretations of New Zealand landscapes, particularly the Northland and Auckland coasts, which display a strong but subtle use of colour. In 1968 she and two other printmakers were commissioned to produce 450 prints for an international hotel group.

Alison Pickmere was a woman of forthright good nature, with a quiet sense of humour. Her sandy-gold hair was tied back in a bun in her youth, and worn bobbed as she matured. Of sturdy physique, she had a winning smile and a distinctive birthmark on her face. She died at Green Lane Hospital on 5 August 1971, survived by her husband. 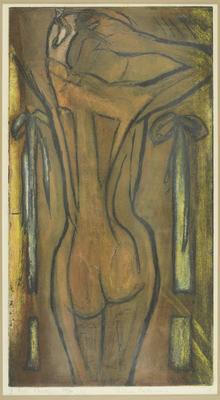