Biography
Manga, later called Rewi Maniapoto, was born in Waikato early in the nineteenth century. According to his memorial at Kihikihi, he was born in 1807, although at his death in 1894 he was said to be in his 70s. He was the direct descendant and namesake of his founding tribal ancestor, Maniapoto. Rewi's father was Te Ngohi, also known as Kawhia, of Ngati Maniapoto. His mother was Te Kore, of Ngati Maniapoto, who was killed by Waikato at Paterangi, near Kihikihi. Rewi belonged to Ngati Paretekawa, a hapu of Ngati Maniapoto. In 1831 Te Ngohi was a member of Potatau Te Wherowhero's war party which captured Pukerangiora in Taranaki from Te Ati Awa. Rewi accompanied his father on this expedition. The centre of Rewi's activities was to be his home district of Kihikihi and Otawhao (Te Awamutu).

Rewi was educated according to his rank and Ngati Maniapoto custom, and although little is known of his early childhood, in adulthood he exemplified all the qualities expected of one raised to lead. He became known by Maori and Pakeha for his oratory, political debate and leadership, knowledge of traditional customs and practices, and military skills. His moko was that of a rangatira.

Rewi was greatly influenced by missionary teaching and the agricultural practices which the missionaries introduced. In 1841 he came in contact with the CMS missionary John Morgan, who had established a station in the Otawhao area. Rewi extended his protection over Morgan for some 20 years. His early missionary education was at the Wesleyan mission station at Te Kopua, on the Waipa River. He became literate, acquired a knowledge of Scripture and was an enthusiastic advocate of the new agriculture. About 1844 Rewi came in contact with Catholic missionaries. Rewi (Levi) may be a baptismal name, but it appears that he was not a Catholic.

In the 1850s Rewi began to emerge as a prominent supporter of the King movement. He raised the King's flag at Ngaruawahia in 1858 when Te Wherowhero was installed as King. In November 1859 he was one of five signatories to an edict passed by the King's runanga prohibiting European magistrates and roads within their territory, and stating that no Maori should be imprisoned in the governor's gaol.

In 1860 Ngati Maniapoto emissaries went to Taranaki, and on their return convinced Rewi that the resistance of Wiremu Kingi Te Rangitake to land sales at Waitara was justified. Rewi then asked for and received Te Wherowhero's approval of Ngati Maniapoto support for Te Rangitake. Ngati Maniapoto fought beside Taranaki people to defeat imperial troops at Puke-ta-kauere, near Waitara, on 27 June 1860, and in January 1861 Rewi led an unsuccessful attack on a redoubt at Huirangi.

Rewi returned from Taranaki convinced that the government intended to undermine Maori authority (te tino rangatiratanga) over their nationality and their land. Some of the King movement leaders believed that the Treaty of Waitangi confirmed that a relationship of equality would continue, allowing Maori a degree of autonomy. Rewi mobilised much support for his point of view among Ngati Maniapoto and Waikato.

In March 1863, in response to what appeared to be provocative and suspicious acts by the government, Rewi organised a party which sacked John Gorst's office at Otawhao and ousted the government magistrate from Waikato. Gorst was seen to be undermining the authority of the King. His expulsion marked Rewi's control over King movement politics and was an indication of his determination to act while others procrastinated.

Rewi's realistic outlook led him to conclude that the British intended to invade Waikato unless the King movement was abandoned. On 8 July 1863 Governor George Grey ordered Lieutenant General Duncan Cameron to begin an invasion of Waikato. Rewi responded to the invasion by leading Ngati Maniapoto military forces in the ensuing war in Waikato. He fought with great energy throughout the campaign. Although he advised against making a stand at Orakau, near Kihikihi, in April 1864, he led by example against great odds.

When Cameron called on the defenders of Orakau to surrender, Rewi is said to have replied: 'Ka whawhai tonu matou, Ake! Ake! Ake!' (We will fight on for ever and ever). Although he may not have spoken these words at Orakau, his attitude to the British invasion was well known. At Ngaruawahia at an earlier meeting Rewi is recorded as having said: 'Kaore ahau e whakaae kia mutu te whawhai, ko taku tohe ano tenei ake! ake! tonu atu!' (I will not agree that the fighting shall cease, I will maintain this for ever and ever).

During the Waikato campaign Maori had enormous respect for Rewi's military prowess. He advocated defensive preparations, and showed a deeper understanding of British military strategy than any other Maori leader. In combat Rewi was in undisputed command and welded the defenders of Orakau into a fighting team, which denied the British the decisive victory they sought.

After the war Rewi did not initially oppose the influence of Te Kooti in Waikato. When Te Kooti sought the help of Tawhiao Te Wherowhero, the second Maori King, he was offered sanctuary and was welcomed by Rewi, who was then sent as an observer to accompany Te Kooti to Taupo, to enlist the support of Horonuku Te Heuheu Tukino IV. He remained with Te Kooti until the prophet's defeat at Te Porere in October 1869, then returned to the King Country where he advised Tawhiao against intervention. It was at this point that Rewi realised that Maori mana was not to be gained or restored solely through military means. Being a political realist, he began to seek the next best alternative, a negotiated peace settlement which would ensure the inalienable retention of Maori lands in Maori hands. In November 1869 he met Donald McLean, the native minister, at Pahiko, near Te Kuiti, to discuss the issues. It was at this meeting that Rewi declared that he would cease fighting. Eventually a negotiated peace settlement was concluded at Waitara on 29 June 1878, whereby Rewi accepted the new order of things.

However, in 1882 Rewi broke with the King movement's policy of no land sales, and with Tawhiao. He feared that Ngati Haua would claim land which was rightfully his, and made an application to the Native Land Court for a hearing, in order to forestall them. Later, Rewi and Te Wahanui permitted the main trunk railway to enter the King Country, and put their lands before the land court so that it could define the tribal boundaries. In fact, this action opened the way for government purchase of land in the King Country.

From the late 1870s Rewi's influence declined. Te Wahanui became increasingly recognised as the spokesman for Ngati Maniapoto, and Rewi's proposals for a Maori district, almost identical to the boundaries of the King Country, where the lands, the railway and its services would be used to benefit Waikato and Ngati Maniapoto, were not acceptable to his people. The government built him a large house at Kihikihi in 1880, in return for his giving up claims to a Crown grant, and waiving his pension. He continued to take part in Native Land Court hearings, and to maintain contact with Tawhiao, Manuhiri (Tamati Ngapora) and others of the King movement. In 1890 he travelled to Auckland, and was presented to the governor, Lord Onslow.

As far as is known Rewi was married once, and had a daughter, born in the early 1870s, who died at Kihikihi in 1890 or 1891. His wife's name was Te Rohu. A monument honouring Rewi was unveiled at Kihikihi in April 1894. Two months later Rewi died at Kihikihi, on 21 June. A great tangi was held, and on 29 June he was buried at the foot of his memorial. 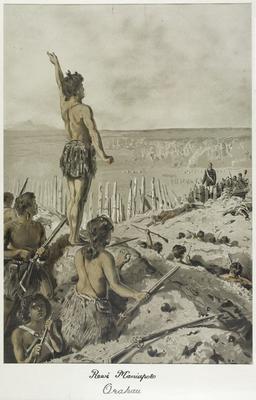