Biography
A coach service between Gisborne and Tolaga Bay was started in 1887 by William McKinley, senior, who had had considerable experience on the Napier-Taupo road. At the outset he made only one trip each way each week. The fares were: 12/- single, 20/- return. It took five good horses to draw the coach, and the journey either way then occupied two full days. Among Mr. McKinley's early assistants were: Fred. Newey, A. McIntyre, William McKinley, junior, Jim McKinley, J. Moore, R. C. Fisken, George McDonald, Joe Brown and B. Storey. In July, 1900, a twice-a-week service was established. Mr. McKinley senior died on 20 January, 1903, and the service was taken over by W. F. Sinclair, who extended it first to Tokomaru Bay and then to Waipiro Bay. In November, 1903, J. R. Redstone and Sons took over the run, and conducted it for over 20 years. It was then superseded by motor services.

The first coach journey from Gisborne to Wairoa, via Tiniroto, was undertaken by C. Dette in November, 1887. A stop overnight was made at the Green Park Arms Hotel at Waerenga-o-Kuri. In the late 1890's a regular service was begun by William McKinley senior. His fares were 20/- single and 40/- return. The run was taken over by A. McIntyre, who sold out to W. F. Sinclair in December, 1903. Shortly afterwards it passed into the hands of Redstone and Sons. By 1899 coaches could use the new road from Gisborne to Wairoa via Morere. William McKinley senior also pioneered this run, and, later, extended it to Lake Waikare-moana. His fares to the lake were: 45/- single and 65/- return. Redstone and Sons took over the service in February, 1903.

John Robert Redstone (born at Tavistock, England, in 16 January 1850 - died 21 October 1932 Mangapapa, Gisborne) was apprenticed to the blacksmithing trade. He came out to Napier in 1872, but, on account of an accident, he had to adopt another form of livelihood. He started the first horse bus service between Napier and The Spit. In June, 1891, he settled in Gisborne, and, for many years, conducted the largest coach and mail service business and livery stables in the district. He died in October, 1932. 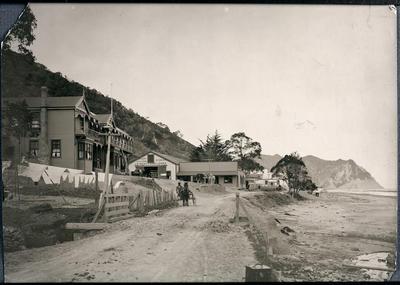