For the past six weeks Toia has been on charter to the Port of Napier, where it has been standing in for the Hawke's Bay port tugs, which underwent routine maintenance work.

Napier Port Services Manager Bruce Lochhead said his organisation was not interested in buying Toia or Ngahue ''at this stage.''

''I know they (CentrePort) have been talking to (potential) offshore buyers for sometime now,'' Lochhead said.
CentrePort Chief Executive Blair O'Keeffe confirmed Toia and Ngahue, both built by the Whangarei Engineering Company, were on the market in New Zealand and overseas.

Toia, which means drag or pull in Maori, arrived in Wellington Harbour from Whangarei in 1972. Five years later in 1977 it was followed by Ngahue.

Toia, Ngahue and Kupe, commissioned in 1971 and sold to Port Taranaki six years ago, were commissioned by the Port of Wellington following the April 10, 1968 sinking of the Wahine and the advent of containerisation.

Once Toia and Ngahue are sold CentrePort's new tugs, Tapuhi and Tiaki which both have a bollard pull of 68 tonnes, will take over all the port's berthing and mooring duties.

Tapuhi and Tiaki were purchased by CentrePort to cater for large cruise liners and container ships. 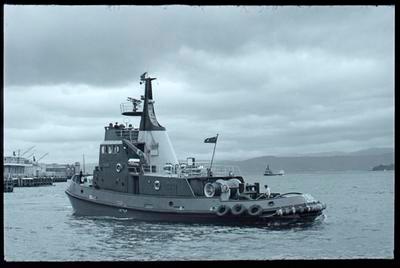